The work of pharmaceutical scientists doesn’t just help relatively healthy people maintain their wellbeing; it gives people with serious illnesses the chance to regain their health.

It is, in short, a potentially life-changing career.

And it begins with a Bachelor of Pharmaceutical Science.

The World Health Organization estimates that between 2016 and 2019, spending on pharmaceuticals across the world will rise dramatically - from $300 billion per year to $400 billion a year.

When you study pharmaceutical sciences at Monash you study in Melbourne, a city renowned for its strength in the life sciences field.

Monash is a university with a reputation of world standing in the area of pharmaceutical sciences. It’s a status acknowledged by those we work with in industry, those who study with us, those who research with and in collaboration with us, and by independent ranking agencies. The most recent QS  World University Rankings by Subject confirmed the University's position as a global leader in the fields of pharmacy and pharmacology.

The results placed the Faculty of Pharmacy and Pharmaceutical Sciences at number one in Australia and the Asia Pacific. Worldwide, it is topped only by Harvard University. It is the highest rank in any discipline of any university in Australia.

A degree with versatility

Although understanding medicines is a central focus of the course, the skills you’ll learn will translate to many different chemistry-related jobs. Our graduates can be found in industries from paint to cosmetics, from drug development to food manufacturing.

Looking for an honours project? 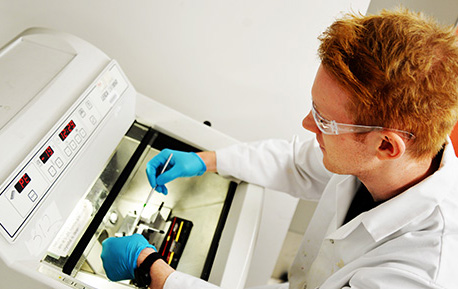