Stan Robson – a life of kindness

Stan owned and operated pharmacies from 1935 until his passing in 1995 in Hamilton, western Victoria, where a pharmacy continues under his name.

He was born in Stawell in 1910 into a family of eight. After graduating from Stawell High School in 1926, he chose an apprenticeship with Tom King's pharmacy in Stawell over a position in his father's monumental-mason business, G H Robson and Sons.

Stan moved to Melbourne in 1928 to continue apprenticeships with pharmacists Alex Holmes and later A Mansell. He graduated on 8 July 1931 as the first member of his family to enter a profession.

Stan excelled as an apprentice and Victorian College of Pharmacy student. He came second in his class in his final year and won certificates of honour in Chemistry and Materia Medica, the Lecturer's Prize in Botany, the President's Prize in Practical Pharmacy and the Sigma Company Prize in Organic Chemistry.

Stan was also a talented footballer and played in the seconds for the Hawthorn Football Club, while working in a pharmacy in Glenferrie Road, Hawthorn.

He graduated in the depths of the Depression and spent five months regularly riding his bike 13 km from Burwood to the city in search of work. His luck changed in February 1932, when he became manager of a pharmacy in the Federal Hotel in Collins Street. While there, he completed a Pharmaceutical Society of Victoria Fellowship in June 1934.

After he and his new wife Bessie had scraped together 600 pounds in savings, a Sigma drug company manager encouraged him to open a pharmacy at Hamilton, Horsham or Warracknabeal; towns in western Victorian where the company was not well represented.

Sigma offered him three months free credit on their products if he set up in the town of his choice. After inspecting his options, he chose Hamilton, and on 14 November 1935, with Bessie's help, he commenced business at 164 Gray St.

His first day's sales amounted to four pounds, seven shillings and one penny (about $360 in 2010). One of his first customers was Mrs Reg Ansett, the wife of the Ansett Airlines' founder.

Stan's pharmacy prospered. In 1958, he acquired Rountree's Pharmacy at 124 Gray Street, which he ran with one of his former apprentices, Lloyd Hocking. Stan also trained his eldest son, David, and, in 1963, all three men became partners in the 124 Gray Street pharmacy, which was later renamed David Lloyd and Co.

In 1968, David Kennett, another former apprentice, joined the partnership before Stan's son David left in 1970, after graduating in medicine.

During the 1960s, Robson's Pharmacy moved to 160 Gray Street. In 1966, Stan acquired a farm on the outskirts of Hamilton, where he spent much of his time until his retirement in 1980, but he remained an active manager at the pharmacy until his death in 1995.

Stan also ran a photographic division at his pharmacy, selling cameras and initially developing and printing films on site. His other interests were St Andrew's Presbyterian Church, where he was treasurer, the Hamilton Golf Club, where he was president, and his farms – first, a bush block at Heywood, then, Glencotta at Hamilton.

Two of Stan and Bessie's sons, David and Graeme, studied medicine, while their youngest son, Ross, graduated in law and commerce before becoming a judge of the Supreme Court of Victoria.  All three boys attended Geelong College and the University of Melbourne's Ormond College.

Stan was a true gentleman renowned for his warmth, cheerful manner, integrity and sincerity. He achieved great success in his chosen profession and was committed to his customers and the Hamilton community. His favourite saying was, "It's all done by kindness". 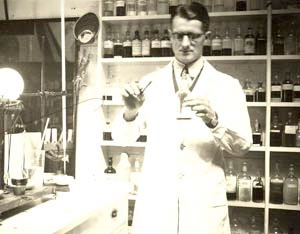