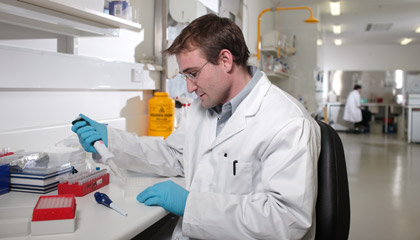 My degree inspired me to go into research. It is fantastic to work on a project knowing that, one day, it may lead to finding a cure for a disease and improve the lives of many people as a result.

I worked on the internationally-recognised OZ project to create effective and affordable antimalarial drugs as part of my PhD at Monash. After graduating, I spent six months in Uganda's Tororo district, where the disease kills hundreds of children a year. I'm now doing post-doctoral research into another  tropical killer, sleeping sickness, at the University of Glasgow.

I completed my PhD in 2007; during that time I had seven papers published in leading scientific journals and one international patent application. After my PhD, I spent six months as a volunteer in a clinic in eastern Uganda's Tororo district, seeing many patients with HIV and malaria.

The district suffers very high malaria transmission, with an estimated 562 infectious mosquito bites per person a year. While I was there, I initiated a pharmacokinetic study of two leading malaria treatments. The biggest challenge was keeping hundreds of blood samples frozen with liquid nitrogen because  of the frequent power blackouts.

I’m now at the University of Glasgow, using modern metabolomics technology to investigate treatments for the Trypanosoma parasite, which causes African sleeping sickness.