The National President of the Pharmacy Guild of Australia has this evening been honoured with a Monash University Distinguished Alumni Award. 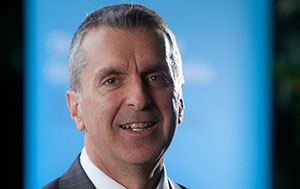 As National President of the Guild, Mr Tambassis represents 5600 community pharmacists across Australia, who dispense over 300 million prescriptions every year for the public.

In 2015, in his capacity as National President of the Guild, he successfully negotiated with the Federal Government a new remuneration structure for community pharmacy and the provision of medicines.

As a pharmacist, he has been an innovator, constantly seeking ways that the profession can better serve the healthcare needs of communities. He owned one of the first 24-hour pharmacies in metropolitan Melbourne between 1997 and 2001. His pharmacy was one of the first to offer enhanced services including contemporary wound care management, weight loss, mental health and harm minimisation programs.

“George exemplifies the leadership and innovation traits we value in our alumni. He thinks deeply about the future of the profession, and has made an outsized contribution to ensuring that it continues to be able to serve communities here and abroad,” Professor Bill Charman, Dean, Faculty of Pharmacy and Pharmaceutical Sciences said.

“George takes a national and international view to all he does -- and has worked hard to link the Australian pharmacy profession with its international counterparts,” he said.